She was originally a player of the SGRUB Beta 2 session. She is a devout follower of the god Chaos, which is evident in her frequent chaotic actions. Due to her habits of disorder, she developed a kismesistude with the orderly Hassii. She was also very disliked by Poxten due to her lowblood status.

She played the session like the other trolls. It is known that some time during the session, she killed SR123 in that universe. During the trolls' fight with the Black King, Ellona's chaotic actions led to Hassii's death, as she went against her plan continually throughout. She and Liwiya later went to Prospit, where they were to inform the queen on their victory, when Ellona killed Liwiya. Poxten found out and tried to avenge her, though Ellona proved to be too powerful for him, and damaged him so badly that he needed to have a lot of his body replaced with mechanical parts in lieu of Murtaw's role, leading to his insanity.

When Poxten later did his damage on the session, the trolls decided to Scratch their session. Ellona was somehow sent into the universe that they had created near the time of the heroes, where she went on continuing her life as a time-traveling follower of Chaos.

Ellona had been stalking Ludicrine for some time, wanting him to be the victim of one of her various chaotic schemes, where he planned to use telekinesis on Cobalt's body to make her carve her symbol into his eye. However, after Cobalt was killed, she changed the plan and used The Mistress as her tool, though in the Mistress' struggling Ludicrine's eye was completely gouged out. Ellona wanted to see him in pain and feeling betrayal for an associate having done this, but she became upset when he did not give an expected reaction. Ellona then declared Ludicrine as her rival.

She was later seen in The Kuipter Files: FINALE!, where she attacked Shenanigans for his actions that she stated were against the intended acts of order and disorder set by Chaos. She allows Revelian the power that he needs to defeat Shenanigans, and but is sent free-falling down to Ludus, where she is found and rescued by Ludicrine. 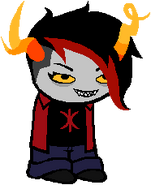 A symbolic rendering of Ellona. 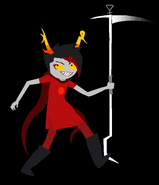 Ellona as a potential God Tier, the Thief of Time.